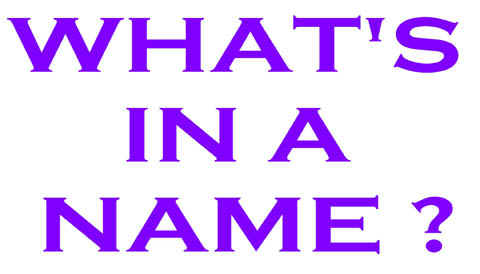 Through out the years of showing dogs , when introducing our furry friends we get a lot of " WOW I like that name ~ there has got to be a story behind it" ~ & yes there usually is, we are big music buffs so we have a lot of song name for our dogs ~ so I got to thinking why a name is SO IMPORTANT ! Everyone has one !! So why don’t I explain the names of our dogs ?? it will be fun !! The list will be added to as  more come to mind :)

I too often wonder the story behind the name so here I start the journey into the fun, sometimes strange world of THE NAME GAME : Here we go...

Now this is an easy one Calli was born in CALIFORNIA so she truly was a California girl also a great song ! !

Named for Pro Wrestler Lex Luger AKA The Total Package, Frank was a HUGE pro wrestling fan "In the day"

Daughter of California Girl so a play on names & a song to.

He was born in MN know as The Northland ~ there was already an established Akita Kennel called that in MN so I went to my German roots & changed Land to Lund ~ the Northlund never really appealed to me so I took the Shu & Ku of his name for my kennel name SHU-KU.

His name meant Divine Wind Snow Warrior ~I got him in the winter & he would charge the kennel fence like crazy !

My first bitch & very special ! She was to be the foundation of my breeding program so I wanted her to have a Never Ending Legacy she was also from some all time greats & I wanted her name to reflect that to.

Littermate to Zak ( I had Zak first & fell in love with Toots after seeing a video of her at 4 months I had to have her ~ named Toots for the white band of color around her waist looked like a Tu Tu. On her otherwise brindle coat.

This boy had to have a registered name starting with "D" as instructed my his breeder ~ I happen to have a pen that had "Damn Im Good " written on the side so that’s where that name came from & it worked ! ( Now a days AKC will not let you use "profanity " in a dogs name ~ unless your very clever about it.

My once in a lifetime gal, when I first saw her in "‘person" I got tears in my eyes she was the closest thing to perfection I had yet to see , I still feel that way today about her nearly 14 years later ~ she is the love of my life, my everything ~ her name is 2 fold , named for her fire red color , snobbish attitude  she even got  a new word named after her  we call it "FLAIROGANCE"  & of course after her sire Cinna-Burster ( great gum BTW ) You’ll see future generations have carried on the "hot" theme,

The dog who was not meant to stay LOL ! ~ she was a puppy back on a co owned bitch & I did not intend to keep her, but after 14 weeks & her ears still failed to stand on their own, I thought I might as well keep her as nobody will want an akita with drop ears , not to mention she was a terror ~ anything bad a puppy can do , she did 3x over !!! I wanted to name her B*tch but knew it would not set to well in public ~ within the next few weeks she blossomed into a fantastic gal & I could not let her go I knew she’d be part of my foundation & I thought Yep You Ain’t Seen Nu’tn Yet ~ a bit vain but true !

Named after a Beck song , she was so self confident she was Where it was at !

His name pretty much sums up the whole dog ! A Witchy X Luger son , he was our first Champion after Frank & I combined our kennels.

The big orange clown ,Frank named him as a baby & there were some tense moments as he grew , I thought he was being to bold in naming him Big Stuff as by 6 months he still was not height ! I worried for nothing as this boy was in deed Big Stuff at 27 ˝   tall & 124 lbs !

From our 1 & only Flair litter, she was the first of our breeding to continue the "hot" theme ~ for a while we could not think of the perfect name for Gem but on the way to AC we pass  a local Ladies Club called THE HOTSPOT & thought that’s the prefect name ! It goes with the theme & she has spots!

Named for his dam Witchy , Super is from her last litter in which she gave her life for them ~

All the pups from this litter were named in honor of Witchy,originally he was owned by our good friend Danny of Zuri Akitas, who later decided to place him & he came back to us, we joke to this day the dog that did not turn out for Danny became our biggiest winnner to date !

Reba is a Co-owned bitch out of Boss & Gem ~ her owner kept with our hot them !

It took a long time to get the right name for our Super X Dion daughter we finally said SuperModel, as Molly has a body to die for but let's just say not much upstairs LOL !!

The prefect name !! Her breeder wanted to use a gun theme in honor of grandsire Rifle & because she is also double up on Tokyo Rose , if the name fits use it.

Our Pistol daughter, figuring this was her last litter we wanted to honor her !

Litter sister to Sig who left our home a promising show prospect & returned 5 months later a wreck ~ Although we did not name her this name it fits her to a "T" ~ we were WARNED by many not to sell to her former owner , but we did & it most likely has cost Flo her show career :( Sometimes Karma is a bitch !

Big, red & full of himself , Razr was named for is sire   CH.Regalias The Cutting Edge

Our stunning SuperModel baby girl, sired by Thriller ~ a combo of both sire & dam’s names that fits this outstanding baby perfectly !

We could not belive how awesome this Primo gal was & what her future would hold so if the name fits  ! Use it !

A beautiful Primo X Boom daughter that was a bit of a Monster as a puppy , the Nevr End'n part goes back on Shelby

Our UK import gal, out of  Ready To Rule  X Pride N Passion ~ attitude  up the wazoo this gal shines like a model !

We could have not asked for a better puppy , all the way from Russia his name had to begin with the letter K as per their rules

he was perfectly named after his sire the one & only ?h. Torazo`s Bumblebee Triumf Siberia ?  the lovely Ch.Bagira